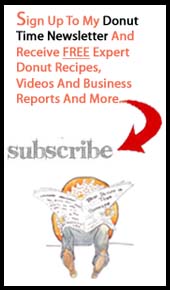 Doughnut or Donut Varieties That Sell

Listed below are descriptions of yeast and cake doughnuts demonstrated in the advanced donut training course, found on DVD. All donuts are derived from proven and tested donut recipes with attention to traditional, unique and lost to history donuts.

The yeast glazed donut is traditionally the signature donut for most donut shops. I will teach you how — along with other advanced donut making methods — to utilize a combination of soft and hard flour to make superior yeast donuts that will please repeat customers.

The chocolate marbled yeast glazed donut is a variation of the traditional yeast donut. Utilizing a combination of yeast doughs, this donut is STUNNING in the showcase and looks as good as it tastes! Donuts such as these will separate your professionally made donuts from the rest!

The marbled chocolate/white raised cinnamon twist is a decadent and STUNNING donut to behold in the showcase! It is rare that a specialty donut can outsell maple bars; however, this specialty donut is an exception! Specialty donuts such as these will separate your donut business from the rest!

Learn how to make traditional donut Bismarcks, filled with a variety of fruit and double whipped crème fillings. I will demonstrate how to properly make these donuts that are light, tender and an explosion of flavor in every bite!

Learn how-to make traditional cinnamon roll donuts guaranteed to please repeat customers. In addition, learn how to make these donuts in volume for donut wholesale. The cinnamon roll can be adapted to make an endless array of varieties, such as adding French filling in the center for a special treat. Raisins can also be added for that decadent touch!

Draw attention to that donut showcase with lemon, cherry and German donuts!

The mocha donut is ideal for up-selling and cross selling related products, such as a mocha latté. The mocha donut consists of double whipped mocha cream filling, mocha powdered sugar, topped with coca chocolate and a coffee bean. “Yummy”!

Maple bars and chocolate bars (commonly known as Long Johns) are indeed Americana at its best! Marble bars are top sellers in the donut shop and with advanced donut training you will have access to authentic maple icing recipes to complement this delicious donut! Some bakers tend to add maple bacon; however, I prefer the traditional maple bar. There is no sugar coating the popularity of the maple bar, and you will learn the most efficient and proper way of making these donuts!

The raspberry mini-fills are excellent donuts that sell FAST! They are also ideal for donut wholesale because the donuts are easy to make in quantity. In addition, the mini-fills can be filled with an array of tasty fillings. One of my donut course members fills these donuts with exotic fruit fillings such as banana and mango, making for an original donut. (How’s that for applied creativity?)

Do not underestimate the simplicity of the “large” Texas donut? The donuts are a big hit with birthday parties, office parties and a great seller around the holidays! For example, at Christmas time ice the donuts in white, decorate the Texas donut with a Christmas theme, and watch the pre-orders soar!

Learn how-to make honey bun donuts like an expert. (Sorry for the bad photo. I will update.) One bite of a honey bun and you are hooked for life! Not many donut shops offer these donuts because the bakers lack professional training. Rest assured: you will have the competitive edge!!!

The buttermilk bar (donut) is an exceptionally moist donut with a distinct texture and flavor, very popular with cake donut consumers. Once you master how to make handmade buttermilk bars, utilizing my universal cake donut recipe, you will be able to make and create an endless variety of cake donuts (listed below).

In order to monetize the donut business it is critical to know which donuts sell well around the holidays. X-mas canes sell well!

Rosette donuts are actually a mini cinnamon roll with a twist. (You will have to see it to believe it.) The rosette donut can be glazed, iced, topped with chocolate and garnished with nuts. A very delicious donut and ideal for donut wholesale. 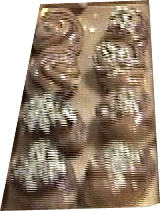 The double chocolate cake donut complemented with toffee/peanut crumb that no donut lover can resist.

French doughnut made by scratch is a lost art in the donut shop. I show you how-to make them by scratch here.

Red velvet cake donuts when made authentically by scratch by scratch will separate your donut business from the rest... I show you two ways to make them.

Blueberry cake donuts are a must have to complement the donut showcase and please repeat customers for years to come. These donuts are ADDICTIVE!

No Risk Guarantee with ABSOLUTELY NO EXCLUSIONS for 90 days! If for ANY REASON you are not 100% satisfied with your ADVANCED  DOUGHNUT TRAINING COURSE , I will promptly refund your money with NO QUESTIONS ASKED! This offer lasts for a full 90 days.

is a secure online retailer for thousands of suppliers on the Internet. When you're ready to make a purchase, you are seamlessly connected to Autherize.net secure online transaction system to complete your order. For your convenience, we accept credit card and PayPal payments.